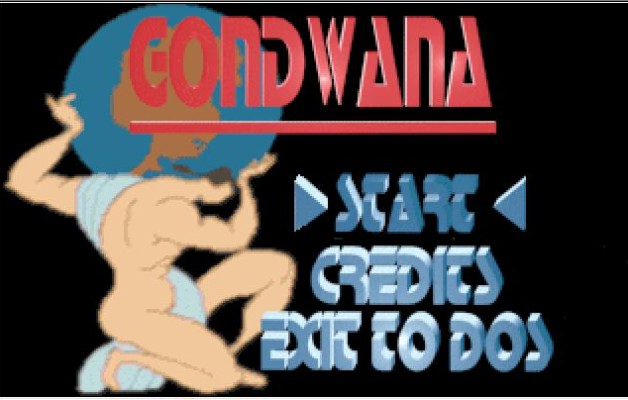 I want to say thanks to Uka from old-games.ru for the interest in my ancient and abandoned game. You can download a copy in the site linked above. Three stars and a half, not so bad!

And, here is the translation from russian of the review of my game:

“On this page, your attention is invited … no, not just another rarity, but something quite out of the ordinary. And this is not pathos and not a metaphor, and the third in the history of Old-Games.ru is the case when something that was not published officially and has never before fallen into the “people”, the developers themselves share with us. With the “Arkona” everyone is probably already a long time ago met, about Captain Fizz, too, at least heard – well, now came the turn of Gondwana.

The author of this game, Elvis Enmanuel Castillo, created it alone in about 1996-1998 for the purpose of sending to a contest conducted by a Spanish magazine covering computer games. What became of her further – that is, whether she was finally sent there, and if she was, then what fate has overtaken her, is not said. Elvis also notes that he tried to go with her to the shareware market, but – again, he said – he could not sell a single copy. As a result, Gondwana was in Styx, and more specifically – on the hard drive of its creator, where she lay for almost twenty years. In 2015, however, he decided to tell the world about it, showing screenshots of the gameplay, but despite the sudden interest in such a curiosity of some members of the Old German community, at first he sharply negatively reacted to the idea of ​​”letting her” into the world – and to a few bearded children it was necessary only to start salivating and to shed bitter tears, as it was just the case when there are really no alternative sources for obtaining a rarity and can not be. But we are with you on Old-Games.ru, a place where you never say “never”. In the early autumn of 2017, one of the members of the collective of our site (whose name you can see on the tab with the file) entered into negotiations with the author, the result of which was the provision of “Gondwana” to people. And this, my friends, is very, very cool.

We conclude this with the necessary introduction and turn to, so to speak, “essence.” The genre Gondwana is a classic and unpretentious platformer with a side view, the plot of which causes a nostalgic smile on the famous Spanish “psychedel” of the so-called “golden age” of national game development. The action takes place on the very Gondwana – known from the school bench supercontinent, in the past part of Rodinia and in the future – Pangea (although this may be the “second” Gondwana, the “Mesozoic” formed after the split of the Pangea mentioned above). According to the author of this platformer, our planet at that time was actively colonized by humanoid aliens (apparently, perfectly tolerated the then climate, which, however, there is no hint); but on one “fine” day, the continent began to disintegrate into five parts (the real geological history was still a little different – but let’s not quibble!) – and at the same time monsters and simply bad people scammed from everywhere with whom the protagonist named Han , which looks like a punk of the turn of the 80′s and 90′s of the XX century, it is necessary to fight with an incomprehensible ultimate goal. Apparently, the Spanish market of the last decade of the past century was already so spiritually disfigured that it was not able to accept what a few years ago would have seemed, in general, an entirely ordinary story, especially against the backdrop of, for example, the story string Mister Gas …

But let’s not talk about sad things. The protagonist is able to jump, squat and fight with his fists, and also has with him (constantly) some kind of automaton – for which you still need to find cartridges. The game process is reduced to jumping on platforms (including moving up and down) and ledges, as well as the destruction of pretty weak and not too aggressive opponents, among whom homeless people (sorry, they are otherwise difficult to name), archers in medieval clothes, innocent-looking birds , monkeys, ghosts, gray humanoids, amazing in their beauty shaggy yeti, winged demons and so on; there are also indestructible enemies – such as a stationary rattlesnake, which can only jump over. Bonuses are represented by coins with a dollar badge (interestingly, where does it come from extraterrestrials in the time of Gondwana? ..), needed just to increase the score, first aid kits, ammunition to the machine (look like a “fire” – and, alas, extremely quickly expended) (the purpose of this object remains unknown), and also, strange as it may sounded, by various objects (for example, a log or stone) that can be picked up and thrown with all the force in the direction of the enemy; When a hero is armed with something, he loses his hands for a while. In total there are five levels (according to the number of continents, which in the end, in the author’s opinion, divided the ancient land mass), and on each of them there are many automatic points of conservation, where the character revives after death, which can come not only from skirmishes with villains , but also, say, as a result of an unsuccessful jump across a stream or a precipice. Another unusually large (especially for the Spanish game) is the number of “lives” – they are already as much as 99, while the health reserve as such (otob)

Pistache Games is a multi-game system like the "A" machines that you could find in a pub. Ten games made with love and care :) https://www.youtube.com/watch?v=tKpko8axFaw Currently It...read more →

This year 2017 I'll try to post some updates regarding new technology I'm currently developing on. Those screen-shots are from a (ancient) project of a...read more →

I want to show up my latest hobby project: The gamedusa GUI I started it on 2013 and I've been doing it drop by drop between...read more →